Awards Programs: What To Call Them When You Don’t Know What They’re Called

The English language is a funky and dynamic creature that is always in motion and continuously evolving.  We make up words when we don’t already have them in the arsenal of over 400,000 at our disposal.  To confuse things even more, many words and phrases mean different things in different places.  And you don’t necessarily have to go far to find the differences.

Our English-speaking Canadian friends, for instance, are accustomed to runners, KD, cutlery, parkades, toques, coffee whitener, and garburators.  (If none of this rings a bell, call Tim Horton’s place, someone there will know.)

And even closer to home, there can be stark differences in colloquial American terminology.  Consider these two passages:

Or how about the term applied by Americans for soft drinks, as illustrated geographically: 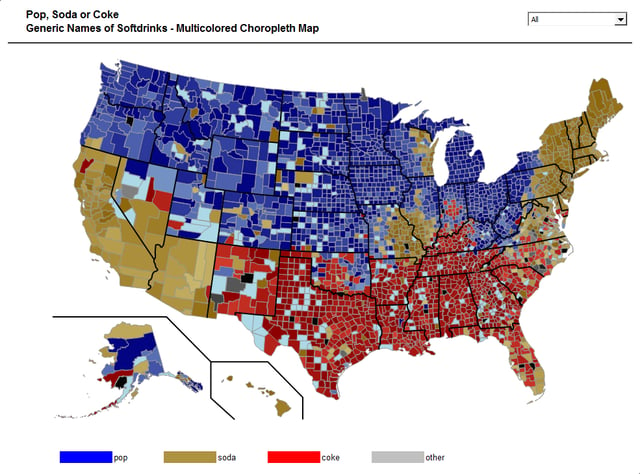 Data and image from http://popvssoda.com:2998/countystats/total-county.html

Clearly, where you are may very well determine what you call it.  And recognition programs are no different.  So pull up a chair and grab a carbonated beverage…

The first thing to know: Everybody is familiar with soft drinks.  You just need to know what to call ‘em in the present setting.  Likewise, 89% of all organizations have formal recognition programs in place.  So the topic is not a foreign one, and you should have no hesitation in addressing it.  But asking, “Do you have awards programs here?” might be like asking if that thing in the middle of their face is a nose.  It’s blunt and clumsy (the question, not the nose), and only leads to pitchy salesperson-speak.

The second thing to know: Don’t ask for a “pop” in Texas.  You identify yourself immediately as an outsider.  Know what you don’t know.  When it comes to recognition awards, you can learn by asking questions—informed and sincere questions.

If you’re inclined to blurt out, “Can I take a shot at your recognition program?” you might also inquire, “How’s good ol’ what’s-his-name?” when asking about her father/husband/son/pet ferret.  It’s careless, obtuse, and anti-social.  Not a very strong selling position.

The fifth thing to know: The person you are talking to may know about soft drinks, but maybe doesn’t actually drink them.  Presume nothing.  He might have little or no involvement in the decision-making process.  But he certainly knows about it.  So it’s essential that you keep the conversation going to discover where the command center is located.  A little adaptive learning and active listening goes a long way.

The fourth thing to know: A universal phrase that will accomplish key goals as a professional recognition salesperson.  It will offend no one, it will initiate the discussion, and it will classify you as the subject-matter expert you are.  The phrase is “Honor Club.”

What is an Honor Club?

Honor Club is a stand-in expression that you can use as a key to open the door to further dialogue.

YOU: “So what can you tell me about your company’s Honor Club?”

YOUR CUSTOMER:  “I’m not sure what you mean.”

YOU:  “An Honor Club is a group of people who have been identified as top achievers for certain accomplishments or behaviors.”

So now you know it by name.  You have, in a sense, been formally introduced.  Of course the given name won’t be Whatcahamcallit—it might be something pretty straightforward, like “President’s Award” or “Chairman’s Club.”  But it might also be something completely indigenous to the organization.  I took a look at some of the titles on awards we do, and I quickly found many unique Honor Club names:

Deal of the Year

Keeper of the Dream

Golden hammer sounds Thor-like cool, and who wouldn’t want to be a keeper of the dream?  But I have no clue what they—or any of the others—really mean.  But I do know it’s important to the company that coined it.  And when you learn what’s important to your customer, you can speak their language, discover their goals and needs, and serve them with capabilities they will value.

Dave Miller is VP of Sales & Marketing at Bruce Fox, Inc. and a professional writer by virtue of the fact his company is paying him to write this blog. He recently became an organ donor because he bought a new piano.  The goal of his blog is to “edu-tain” (educate + entertain) promotional products distributors, with a focus on custom work.  Dave also finds it very awkward to write about himself in the third person.

Tags: Benefits for the distributor