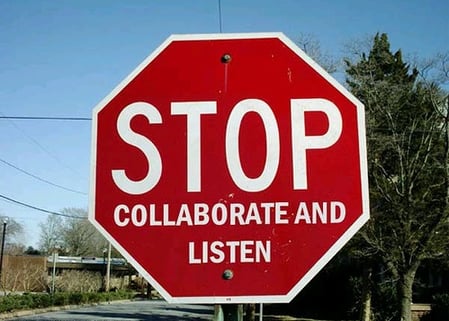 I was stopped at a red light near our office and factory, pointed south at the intersection of Grant Line Road and Mt. Tabor Road, a moderately busy intersection in New Albany, Indiana.  I happened to be first in line in the left lane, so I had a clear view of the woman in the car across from me, heading the opposite direction.

She was busy texting.

The light turned green for us both, and I proceded through the intersection while she sat at her green light.  She was still busy texting.

As I made my way through the intersection, an oncoming car was moving along at a pretty good clip.  I could see, as he passed, that he was busy texting.

The screeching of tires cued me to check the sideview mirror just in time to see the ensuing collision, accompanied by the unmistakable sound of metal and plastic ramming into metal and plastic.  Like a garbage can full of Legos being dropped from 10 feet onto concrete.

As far as accidents go, it was minor.  No airbags were deployed, and the two drivers were out of their now-conjoined cars by the time I swung back around.  Of course they were texting.  Maybe they were texting each other.  Thankfully, the cost of the lesson was to be paid in dollars, not injuries—or worse.

Clearly, it makes sense to any reasonable human being that texting and driving, like a fudge and oyster milkshake, is a really bad combination.  In fact, 1 in 4 car accidents in the U.S. are caused by texting while driving.  And texting while driving is 6 times more likely to get you in an accident than drunk driving.

I certainly advocate any measure that will reduce the plague of Driving While Intexticated, but the First World profundity of the incident between these two failed multitaksers is what resonated most clearly with me…

…Are we really that busy?

…Do we need to be that busy?

…Perhaps most provocatively, does it do more harm than good to be that busy?

So let’s come to terms with some truths around our propensity to take on too many things at once, and our hastiness to move on to the next thing.  I can only put this in context with my own experiences in my business, but it applies to virtually any field:

1. Multitasking is not a skill, it’s a weakness

The plain truth is that the human brain functions much more efficiently when focused on a single task.  Working on an Excel spreadsheet while on a conference call is akin to climbing a ladder while reading a book.  The two tasks, taken on separately, are not all that taxing.  But together they are distracting, if not altogether hazardous.

This article from Health.com dispels the multitasking myth:
12 Reasons to Stop Multitasking Now

I understand that impulsiveness is a legitimate condition, but I also perceive that many among us self-identify and assert a clinical disorder as an excuse for why they move from one shiny object immediately to another.  There is a difference between not being able to focus and not wanting to focus.  Other than being rude and distracting, lack of attentiveness also prevents the effective transmission and exchange of information, which is the whole point of communication.  There are millions of adults with diagnosed ADHD—and it seems as though I’ve met most of them.

This is not a coincidence.  Active listening only comes from awareness and practice.  If you are thinking of the next thing to say while someone else is talking, you aren’t listening as keenly as you could…or should.  In a business where the devil is in the details, these communication gaps can prove to be the difference between success and failure.

I was recently on the phone with a distributor customer who was seeking solutions for a custom award program.  Not an uncommon occurrence when you’re in the custom award business.  But this conversation was anything but common.  During the course of the 10-minute discussion, I don’t think I completed one sentence.  If it hadn’t been comical, it would have been tragic.  My defense was on the field the entire game, and the resulting fatigue and frustration rendered the whole dialog meaningless.

5. Kreskin has left the building

As a custom design house, there are certain details that must be known before we can jump into action.  But sometimes the most basic elements are missing—and the distributor is unable/unwilling to engage their client for further discovery.  “Something nice” is not a budget guideline, and “as soon as possible” is not a delivery objective.

It’s nearly impossible to hit the target in a smoke-filled room.  Clear the air, and help your suppliers help your customer.  Otherwise, we’re just guessing.

I am ceaselessly amazed at how many people disregard this simple standard, specifically by failing to respond to open project follow-ups.  I think I can speak for any supplier in saying we’re all in on investing our resources into a well-qualified opportunity.  But this comes with a caveat:  Meaningful Feedback.

At our company, we have a pretty stringent procedure for follow-ups at specific intervals once the ball is out of our court.  Despite these follow-up efforts, more than half of the projects that were cancelled last year were because there was no response regarding the outcome.  As in none…nada… radio silence.  In the “Is it us, or is it you?” assessment, it ain’t us in these cases.  And it’s a good way to alienate yourself from your suppliers.  (See “Wolf, The Boy Who Cried")

7. Graphic design is not product design

Don’t get me wrong on this one—we love any input our distributors and their customers have during the creative process.  Engaging everyone from the outset is an excellent way to foster early buy-in and spot-on ideas.  So yes, please, give us your brain droppings and cocktail napkin doodles.  The more the merrier—bring it on!

But FTLOG, resist the temptation to design product!  (We’re looking at you, graphic designers and ad agency creatives.)  We have to understand factors like the thermostatic coefficient of a variety of materials, for instance.  True product design entails a significant amount of engineering know-how.  A good supplier can steer you and your client away from the pinch-points that are everywhere, and design something that looks cool, is feasible to build, and works.  Rely on your supplier partners to guide the creative process—that’s what we’re here for.

Navigating the promotional products roadway is not much different than driving to work or the store or wherever.  Stop when you need to, proceed with care when it’s your turn, focus without distraction, and demonstrate a measure of common courtesy.  These are all things you can control, and they will get you there—to your destination or to a great solution for your customers—safely and without incident.

Now you can go catch up on those text messages that have been rolling in while you’ve been reading this.

Dave Miller is VP of Sales & Marketing at Bruce Fox, Inc. and a professional writer by virtue of the fact his company is paying him to write this blog.  He has often used the nom de plume of Rob Van Winkle.  The goal of his blog is to “edu-tain” (educate + entertain) promotional products distributors, with a focus on custom work.  If you’ve got a problem, yo, I’ll solve it.