Who The Hell Is Carl Friedrich Gauss And Why Do We Care? 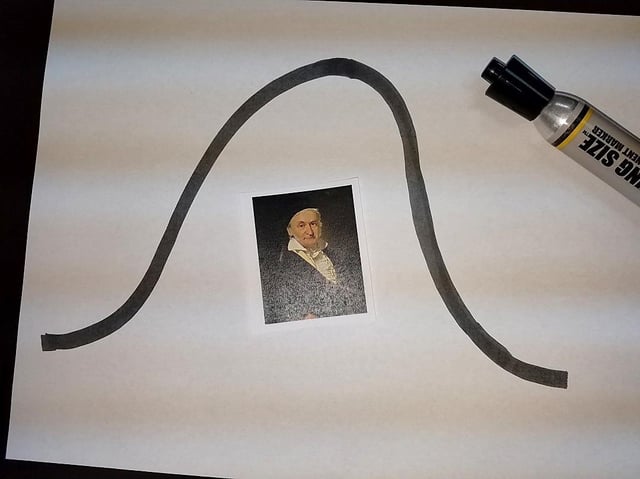 Here’s a picture of our hero, Carl Friedrich Gauss, at the peak of his life, which spanned from 1777 to 1855.  Gauss was a German mathematician, and developed many statistical theories, including the Gaussian principle of normal distribution, a.k.a. The Bell Curve.  So here he is, comfortably camping out under the famous bell shape I rendered with a particularly smelly marker.

Now I will spare you (and me) of the technical jargon and theoretical aspects of the bell curve, but it works something like this:

Within a population, there is a distribution of characteristics, results, measurements, etc. that can be plotted along a line.  It happens that the distribution of the population along this line, when rendered graphically, humps up in the middle at the “mean”—the line where half are under, half are over.  At the extremes, the populations diminish. 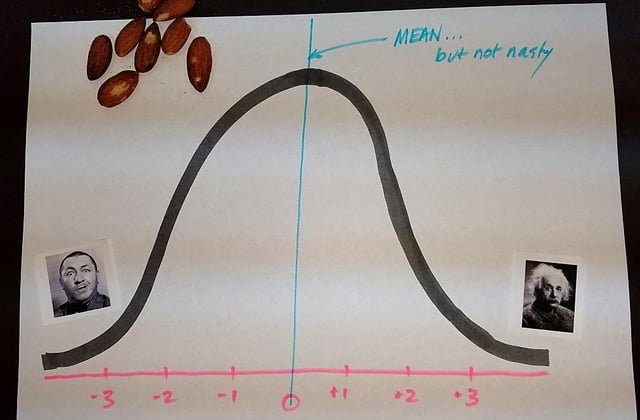 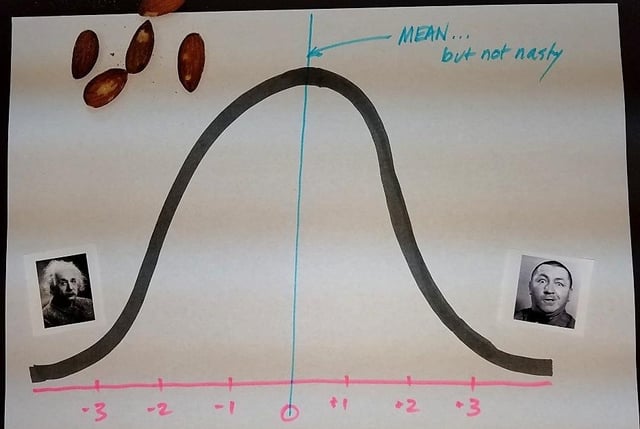 The point is, the bell curve plot can be utilized for nearly any variable characteristic or performance metric—height, IQ, sales performance, size of a population of almond nuts. 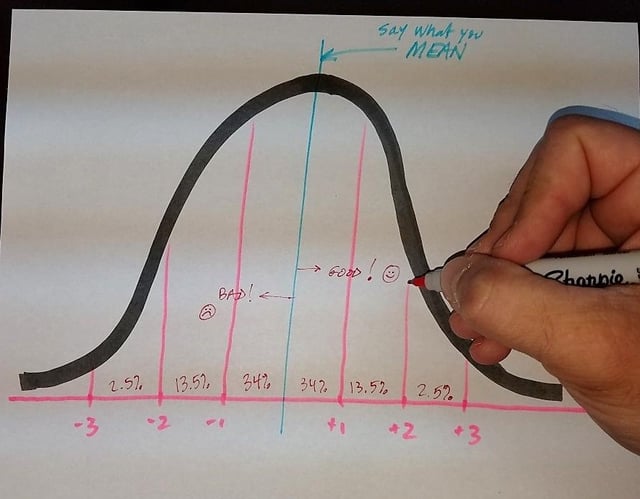 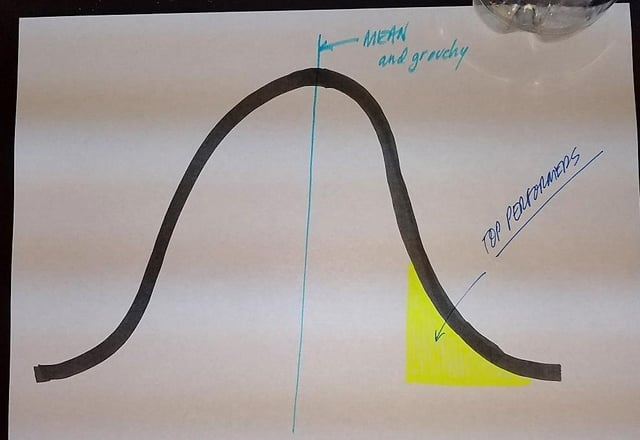 So, as promotional products salespeople who are focused on recognition programs, why do we care?  Well, you may have caught where I mentioned this bell curve idea can apply to sales performance, the most common corporate recognition program there is.  There are certainly others that are valid examples, but let’s stick with this one for a minute or three.

A sales recognition “Honor Club” is intended to recognize the top performers, as measured by sales—quota, growth, profitability…whatever.  So there’s a segment of the population—typically something like 15%—that is recognized for superior performance.  Though the individuals may shift from one period to another, the top 15% is always the top 15%.  The point is, recognition serves as a reward to the high end.  But how does rewarding top performers create ROI for recognition programs? 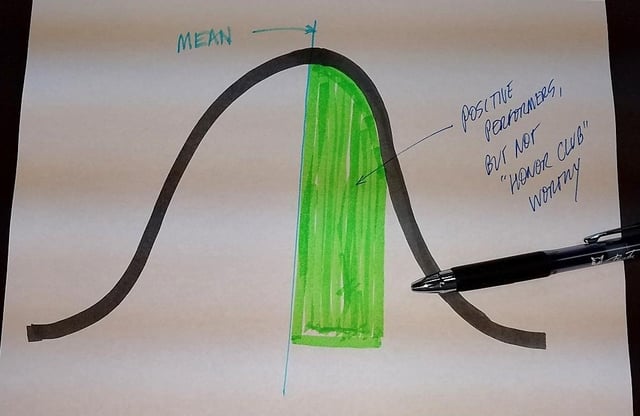 Without splitting hairs, I’ll assert that it largely doesn’t.  At least directly.  (Maybe another blog for another day.) 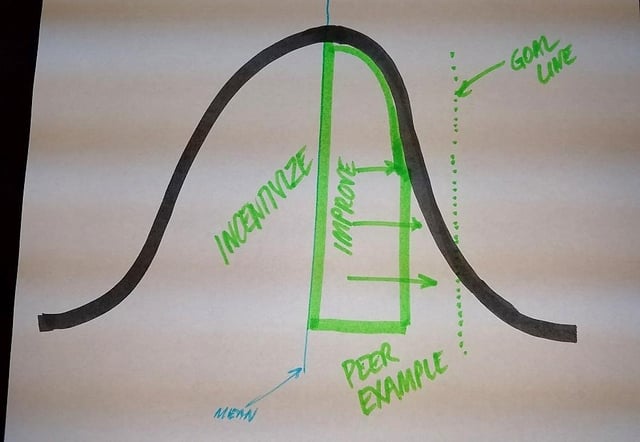 What does move the needle is the example set by those top performers functions as an incentive for the next tier to aspire to greater performance.  This type of inverted peer pressure—peer suction, maybe?—is how a segment of the unrecognized population is induced to amp it up so they can be included in the elite Honor Roll class.  (This is why public recognition is important.) 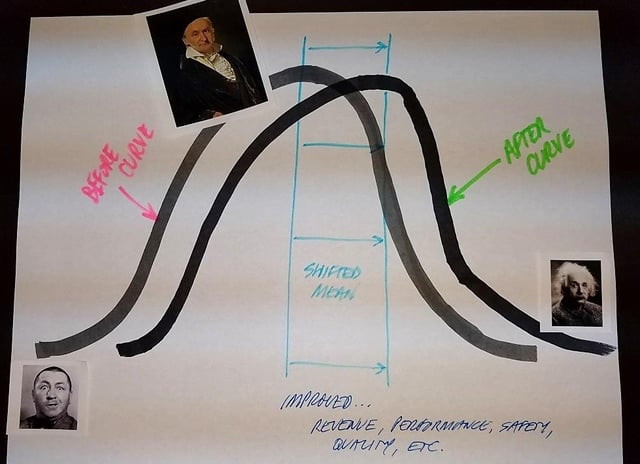 The result is the mean is shifted toward the “good”—the 50th percentile is higher than it was before.  As a result the entire Bell curve moves, which means the aggregate results of the whole population are likely to be improved.  It’s easy to think of this in quantifiable terms like dollars associated with sales, but it also works for safety, quality, accuracy—just about anything a yardstick can be put to.

So, when it comes to measuring ROI of a recognition program, good things will certainly occur when shift happens!

Dave Miller is VP of Sales & Marketing at Bruce Fox, Inc. and a professional writer by virtue of the fact his company is paying him to write this blog.  He has been with Bruce Fox since 1990, which is only 6 weeks after the birth of Bruce Fox’s marketing coordinator, Lindsey Howard.  The goal of his blog is to “edu-tain” (educate + entertain) promotional products distributors, with a focus on custom work.  Dave is reasonably comfortable in his own skin, if only because no one else’s fits quite right.