Accentuate the Positive with Employee Recognition 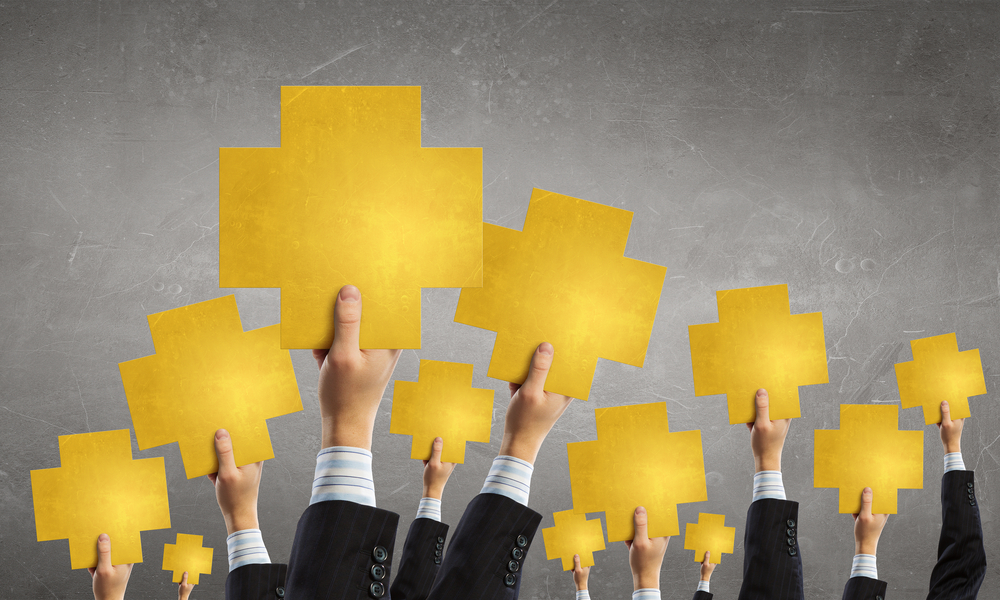 The holidays are here, and I’ve been listening to a variety of holiday music for weeks.

But as I’m on a Bing Crosby playlist, a song popped up that I haven’t heard in a while: Accentuate the Positive.

The lyrics are rather positive, talking about spreading joy and happiness while eliminating the negative and gloom. Which is perfect for this time of year, right?

However, being the workaholic that I am, I couldn’t help but relate this song to employee recognition.

Accentuate the Positive with Employee Recognition

We all understand the importance of employee recognition – if not, be sure to read this.

But despite people knowing the necessity, few understand how to be effective.

You see, a recognition/awards program is not and will not be effective if you just give it to anyone or everyone. Consolation prizes are not effective – adults know what those insinuate and mean.

Instead, you need to promote and accentuate the deeds and actions you want to encourage. If you reward the best of the best, you will inspire others to improve as well. In addition, recognizing those top performers keeps them engaged, passionate, and feeling valued. 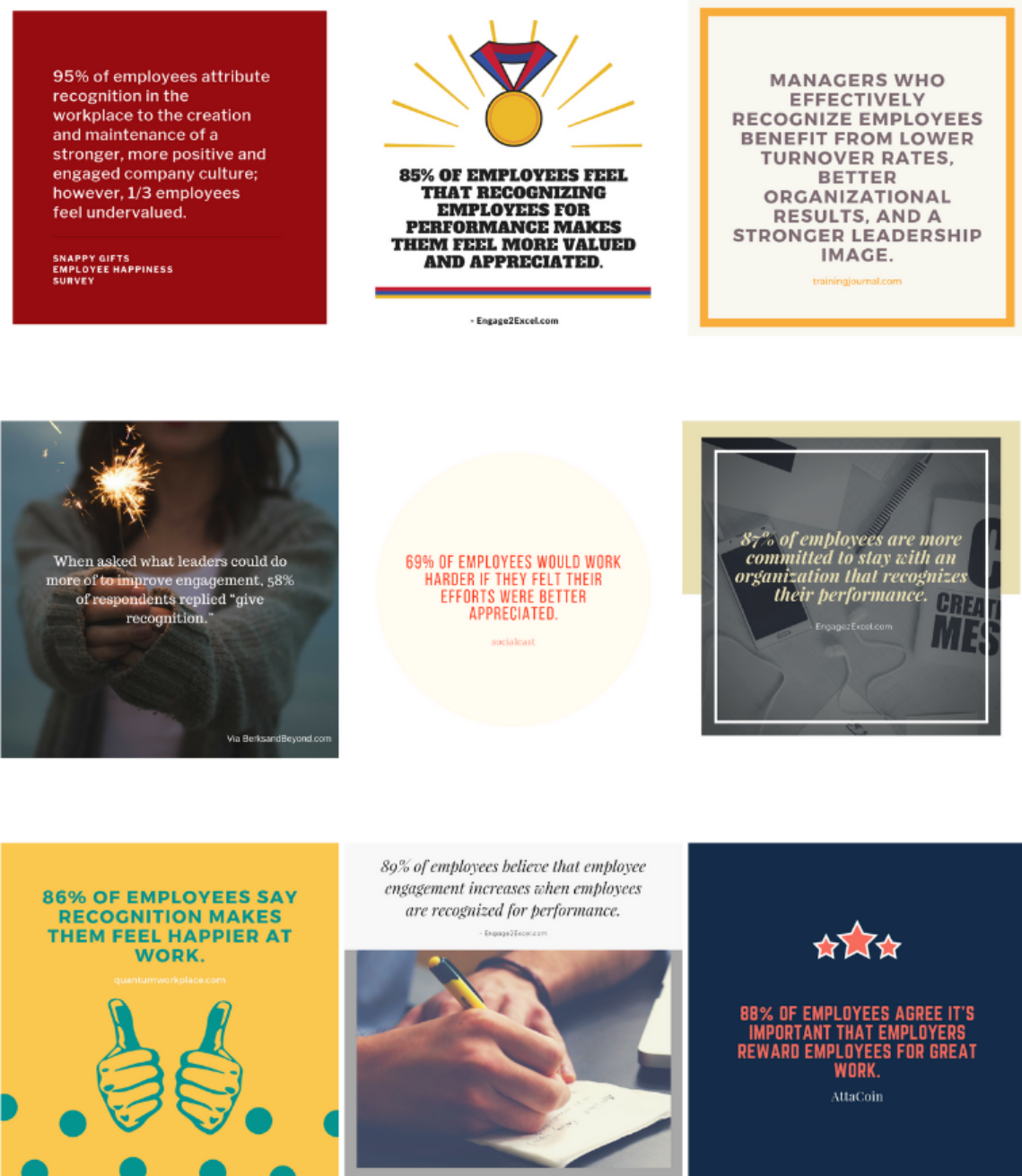 Hence, in order to effectively engage and recognize employees, you need to highlight the outstanding actions or accomplishments. Accentuate the positive – get it, get it?

As mentioned earlier, you should never just give everyone an award – everyone getting an award doesn’t give everyone the “warm fuzzies,” instead it’s more of a slap in the face for those who did the hard work. And please remember that no one wants a banana or something that makes them mad or hurt. Employee recognition should be a positive aspect of your company culture, but it should also highlight the positive work your employees have done.

So, let’s look at an excerpt from Dave’s blog Who the Hell is Carl Friedrich Gauss and Why Do We Care? It discusses how to effectively spot and eventually recognize those “top tier” performers.

A bell curve plot can be utilized for nearly any variable characteristic or performance metric—height, IQ, sales performance, size of a population of almond nuts. 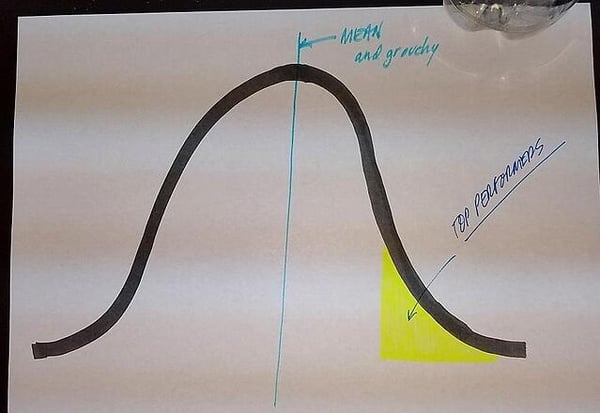 So, as we’re creating or evaluating effective recognition programs, why do we care? Well, you may have caught where I mentioned this bell curve idea can apply to sales performance, the most common corporate recognition program there is.  There are certainly others that are valid examples, but let’s stick with this one for a minute or three.

A sales recognition “Honor Club” is intended to recognize the top performers, as measured by sales—quota, growth, profitability…whatever. So, there’s a segment of the population—typically something like 15%—that is recognized for superior performance. Though the individuals may shift from one period to another, the top 15% is always the top 15%. The point is, recognition serves as a reward to the high end. But how does rewarding top performers create ROI for recognition programs? 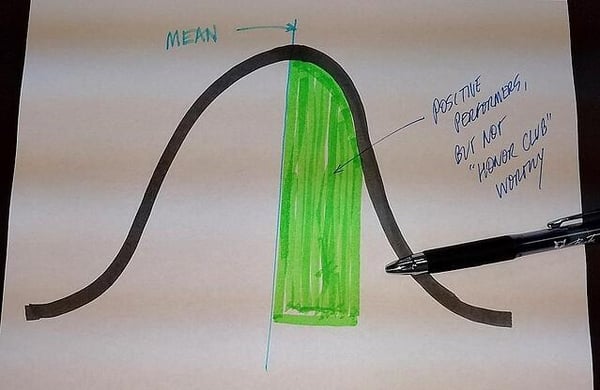 Without splitting hairs, I’ll assert that it largely doesn’t. At least directly.  (Maybe another blog for another day.) 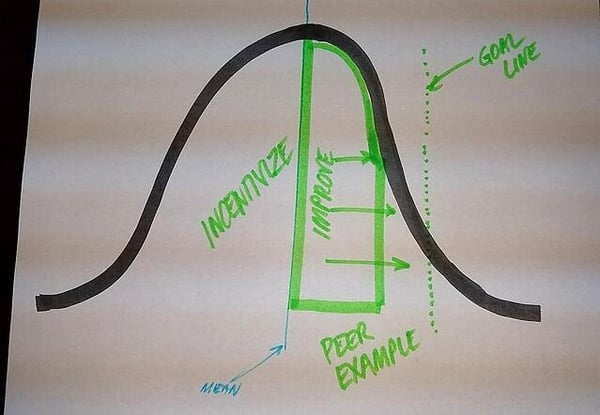 What does move the needle is the example set by those top performers functions as an incentive for the next tier to aspire to greater performance. This type of inverted peer pressure—peer suction, maybe? —is how a segment of the unrecognized population is induced to amp it up so they can be included in the elite Honor Roll class. (This is why public recognition is important.) 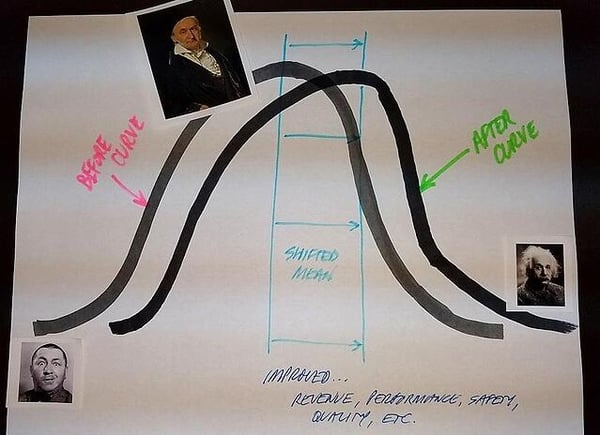 The result is the mean is shifted toward the “good”—the 50th percentile is higher than it was before. As a result, the entire bell curve moves, which means the aggregate results of the whole population are likely to be improved. It’s easy to think of this in quantifiable terms like dollars associated with sales, but it also works for safety, quality, accuracy—just about anything a yardstick can be put to.

So, when it comes to measuring ROI of a recognition program, good things will certainly occur when shift happens!

As Dave mentioned, shift happens when you recognize the best of the best. Accentuate the positive by recognizing those who deserve it and creating a company culture built upon those positive actions and accomplishments.